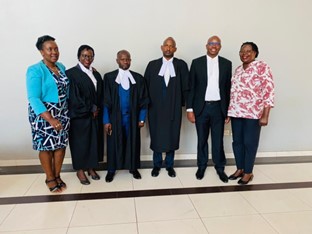 In 2016, the Uganda Network on Law, Ethics and HIV/AIDS (UGANET), together with Prof. Ben Twinomugisha of School of Law – Makerere and Lilian Mworeko, Executive Director, International Community of Women Living with HIV Eastern Africa (ICWEA), filed the HIV petition on behalf of the People Living with HIV and HIV Law coalition.

The petition seeks the constitutional court’s interpretation of the three clauses mentioned above in the HIV Prevention and Control Act of 2015.

According to Counsel Immaculate Owomugisha, who is also the Head of Advocacy and Strategic Litigation at UGANET, “The Act in its current form puts stringent punishments for HIV nondisclosure, exposure, and transmission, which as the community of People Living with HIV and CSO HIV law coalition find unfair and, if not addressed by the court, will hinder people from accessing HIV related services – and this will have a far-reaching impact on attaining the global HIV goal of ending AID by 2030.”

Consequently, the petition seeks to challenge some sections of the HIV prevention and Central Act, 2015, namely;

S.18(e) on disclosure of the HIV status by medical work to one’s employer or any other person deemed to be in constant contact with a person living with HIV, s.41 and 43, about the intentional transmission of HIV. The petition seeks to challenge the extent and parameters of intent in this case, and s.44 criminalizes HIV transmission without any parameters given.

Today, the Constitutional Court finally heard the case. The respondent (the Attorney General on behalf of Uganda) introduced new issues, which the petitioner (the HIV Law Coalition and partners) requested more time to respond to. The Court adjourned the hearing, granting a week’s stay to the petitioner to file their response.

“We have been given a week to file our response. We are confident that this is enough time. Next is for the Court to make a ruling and judgment based on the written evidence we will have presented at a later date given to us by the court,” said Counsel Owomugisha.

A press statement released by the HIV Law Coalition expressed that, “Criminal punishment and discrimination on the basis of HIV infection is both a legal and human rights question. The stigmatizing impact and damaging public health consequences of criminalization and other forms of discrimination against people living with HIV occur under the guise of addressing HIV transmission.”

The judicial officers should be guided by HIV science which tells us that if one’s Viral load is undetectable, then chances of transmitting HIV are very minimal – the U=U concept. As such, sections that criminalize HIV in the HIV Prevention and Control Act should be repealed if we are to sustain the HIV prevention gains.

While handling this matter, it is also important to note that HIV is a disease like any other, with thousands of children and young people facing the daily fears of living with a disease they were born with, but also with the hope that the fight against HIV is making huge milestones that could lead to finding a permanent cure, and prevent its further spread if the right attitudes at all levels are employed.

As a community of HIV Actors, we remind the nation that whereas we are on track to end Aids, we cannot end it or reach epidemic control with HIV Criminalization and heightened discrimination of the same. Human rights and dignity need to be accorded to all.